I got one of those Ciate Tree Trinkets for Christmas. It’s a lovely little gift. It’s a clear plastic bauble that you can hang on the Christmas tree and it has a mini nail polish inside. It’s made for polish lovers right?

Except that Ciate apparently stole a nail polish blogger’s original idea. Then sold it as their own and sent legal paperwork to the bloggers who created or used the nail idea which ordered them to stop posting said nail idea, because it now belonged to Ciate. You can read more about it here, here and here, if you’re interested in the details. :/

There was a widespread boycott of all Ciate products because of this. I have enjoyed a few free mini polishes that were given away with magazines but I never purchased one because they really went too far.

This all happened long before I was a blogger, and although I have very few original ideas, (damn you Pinterest!), if I did have one then I would be reeeeallly upset to have a huge nail polish company take it and order me to stop doing it! and then make a huge profit off my idea!

So I love my gift and the polish is really pretty but I just can’t purchase any Ciate products. They just went. too. far.

I’m a little late posting these but I had to share my little Snowman with you guys! I called him Harry! (See him below)

I had loads of ideas for Christmas nails but time got away from me this year and this was my only attempt.

The red base colour is Nicole by OPI Kourt is Red-y For a Pedi. I used striping tape* to create a candy cane pattern on my pinkie. I simply dipped my finger in some green (no name) glitter and patted it over a layer of wet topcoat to create the green glitter gradient on my ring finger. My Middle finger is supposed to be a Christmas tree with holographic bar glitter as tinsel and red caviar beads as baubles and a red star on top but I think using red was a mistake because you can’t really see them and I used my Model’s Own white nail art pen/striper to freehand a snowflake design on my ring finger.

(I’m describing each nail in case you can’t tell what I meant them to be :P)

This is my snowman Harry! He has a little blue holographic bar glitter scarf to keep him warm out in the falling snow! I added some Nails Inc Electric Lane for extra sparkle over Harry and my index finger and topped everything off with Nails Inc Kensington Caviar Top Coat.

Thanks for looking and Merry Christmas!

*Just in case anyone doesn’t know what striping tape is; it’s a teeny, tiny roll of sellotape that can be used like painters tape and applied over dry nail polish, painted over and removed to create straight lines. 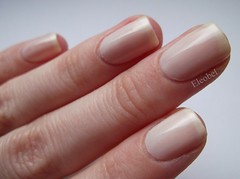 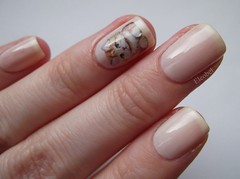 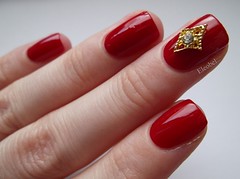